Foreign Investors and Entrepreneurs Flock to Set Up Shop in Singapore

Singapore remained the destination of choice for foreign companies in Q2 2016, with the number of internationally owned companies representing 39% of all business formations during the quarter, according to Hawksford’s Business Formations Statistics Report for the second quarter of 2016.

A 2% increase on Q1 2016, when the trend was first noted, the growth is a strong endorsement of Singapore as a regional business hub. Amidst the uncertain and sluggish global economic conditions, foreign entrepreneurs and enterprises are undeterred in their confidence in Singapore as a commercial launch pad for their ventures and investments.

In Q2 there was also a significant jump in the number of Foreign Company Branch Offices registered. Compared to the corresponding period of Q2 2015, the total business registration in Q2 2016 leapt up by 10.4%. Interestingly, the Foreign Branch Office registrations in Singapore expanded by a massive 21.3%, underscoring Singapore’s reputation among foreign companies and multinational companies that seek access to the Asian markets.

Conversely, the share of wholly locally owned companies dropped to 48%. The share of companies formed by Singaporean individuals dropped further in Q2 to 56%, a significant decline from its traditional majority share of around 70%. While the share of entrepreneurs and investors from China, Malaysia and the US grew marginally as international investors and entrepreneurs flocked to Singapore to take advantage of its safety net, locals are showing signs of restraint.

Ms. Jacqueline Low, COO of Hawksford Singapore, said ‘Q2 2016 was a robust period for business formations, with a significant 10.8% growth in number of new business formed, which is exceptional given the global economic backdrop. The continued uptrend in the share of foreign owned companies is an unprecedented variance, which we believe is caused by the uncertain global political situation and the less than moderate economic growth momentum in the mature economies.

‘We believe that business formation growth rates will hold steady in the third quarter, before slowing down at the end of the year. We also predict the share of foreign owned companies to taper down by the last quarter and the historical trend will be restored. Singapore is resilient and has strong business foundations that will hold up well against the sluggish global economy.’ 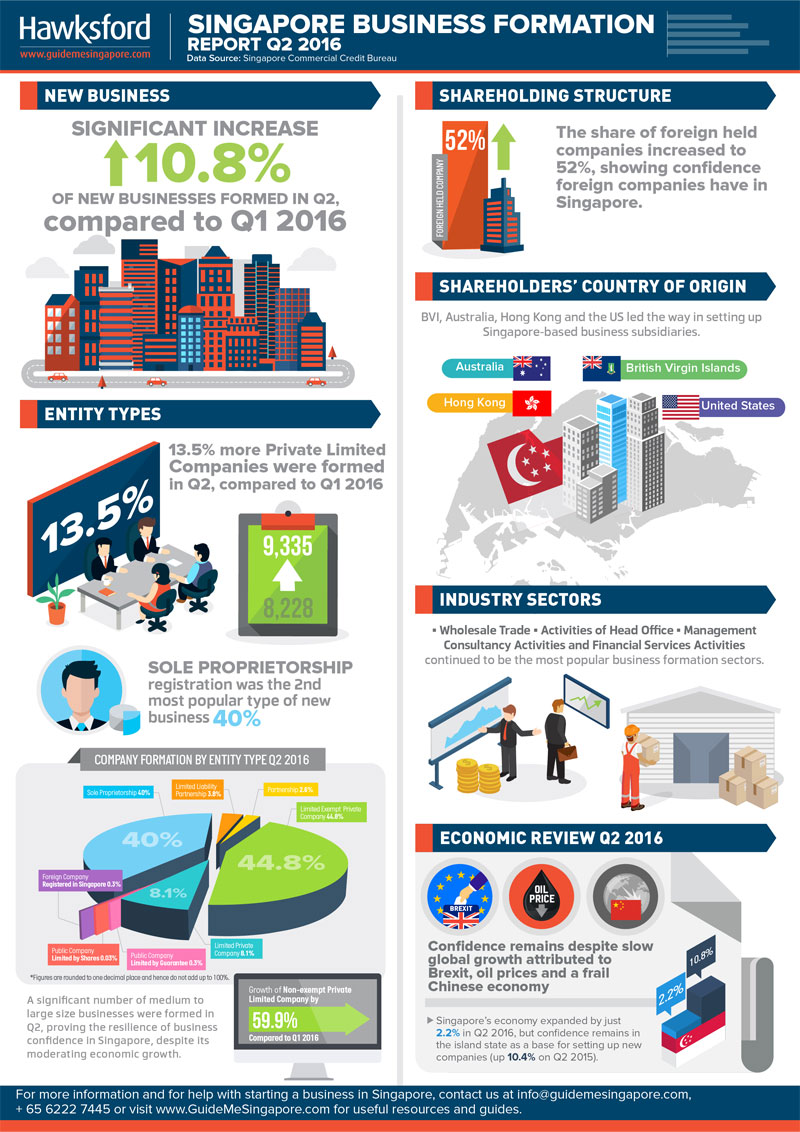