Despite a particularly challenging year on the global economic front, the number of company formations recorded in Singapore during 2016 has remained consistent with the figures recorded in the previous year.

In particular, 2016 has been a positive year for foreign individuals choosing Singapore as the base for setting up their new ventures, underscoring Singapore’s reputation as a solid business haven against the volatile macro environment.

64,748 businesses were formed in Singapore during 2016, just 0.1% fewer than in 2015. The final quarters of both 2015 and 2016 both recorded a 5.7% decrease against the third quarter of the year. These figures remain within the healthy range and are in keeping the annual averages registered in recent years, with the exception of 2014. 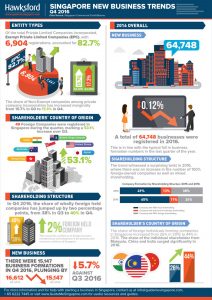 “Overall it was a great year for business formation because it beat all odds of a slow economic growth and immense uncertainty over global liquidity, trade dynamics and regulatory changes. The year managed to steadily maintain 2015 formations, with significant increases in Exempt Private Companies and Foreign Company Branch Offices. What is reassuring is the growth of medium and large-scale businesses as reflected by the increase in the number of Non-Exempt and Public Companies Limited by Share that are being registered in Singapore. The share of foreign held companies also continues to grow. As Western economies suffer from lackluster growth, Asia remains a beacon of growth that continues to attract foreign companies to set up subsidiaries. Investors and entrepreneurs are also following this trend.”

Subsidiary formation by foreign companies continued to account for 47% in the total subsidiary formations in Q4. Entities from British Virgin Islands (6%) and Hong Kong (5%) continue to account for the highest share of foreign subsidiaries formed. Singapore continued to attract international investors and entrepreneurs. The share of companies formed by foreign individual shareholders increased from 44% in Q3 to 45% in Q4. Individuals from India, China and Malaysia continue to dominate. Individual investors are also increasingly coming from diverse countries such as Japan, Philippines and South Korea. 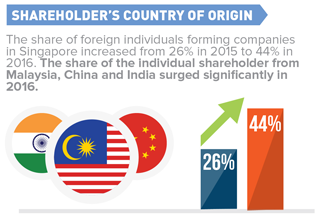 “The trends seen in 2016 will feed the growth and sustainability of small and domestic businesses in Singapore. With the report announced on 9 February 2017 by the Committee on the Future Economy (CFE) outlining 7 strategies for the next decade, covering 3 main areas of people, businesses and government will collectively help Singapore to forge ahead and be nimble to face and change with situations, we remain highly optimistic about 2017, although we anticipate some moderation in the first half of the year,” added Ms Low.